Health problems and social issues often accumulate for vulnerable groups
Some of the older people are in a vulnerable situation due to an accumulation of chronic diseases and other medical and social issues. This group will continue to grow. People who have a lower socio-economic status often have an unhealthy lifestyle. They also have to deal with social issues more often, which are accompanied by stress. Negative effects resulting from labour market developments such as robot automation and digitisation primarily affect less skilled workers. This can exacerbate the social issues and stress among people with a lower socio-economic status. These underlying social issues often need to be resolved first, before creating room to work on a healthy lifestyle.

An accumulation of problems puts older people in a vulnerable position

Percentage of population aged 65 and over with and without a chronic condition that experience insufficient control over their own lives, 2016

Indicator(s) used: Number of Dutch people (19+) who experience insufficient control over their lives.

People who have lower levels of education also more often have to deal with social issues, such as unemployment and poverty. A number of future developments in the labour market can intensify these issues, because they are expected to have a bigger impact on employees that have lower levels of education than on employees who have attained higher education. These trends mainly involve technological development, such as robot-based automation and digitisation. These increasingly complex technologies will create a bigger demand for employees with higher education, with new skills, while robots can replace the work of people with lower levels of education. The ongoing digitisation requires different competencies from employees, which also change rapidly. This makes lifelong learning a crucial necessity. Less skilled workers may find it difficult to meet these demands, as will older people, flex workers and people in poor health.

These social issues will result in stress, which in turn might have a detrimental effect on lifestyle. In many cases, there will only be room to work on a healthier lifestyle when the underlying causes of this stress have actually been resolved. Interventions such as workforce mediation or debt counselling are therefore often a better starting point for improving health in these cases than addressing lifestyle factors.

Adults with no, one, two or three risk factors by educational level, 2016

Indicators used: Percentage of population aged 25 and over being overweight (Body mass index >= 25), being an occasional smoker (including daily smoking), and/or excessively using alcohol (more than 21/ 14 glasses of alcohol per man/woman per week), disaggregated by educational level (low, middle low, middle high, high).

Percentages might differ from those presented in the Trend Scenario due to the use of different sources.

Accumulation of problems also occurs at neighbourhood level; extensive clustering in the northeast of the Netherlands

An accumulation of problems plays a role not only in individual cases, but also in specific neighbourhoods. Neighbourhoods where people have a higher-than-average occurrence of smoking, excessive alcohol use and overweight are found all across the Netherlands. However, it is apparent that there are clusters in the northern and easternmost regions of the country. To gain a better understanding of areas that also have a high prevalence of social issues, it was assessed which neighbourhoods make extensive use of formal arrangements for workforce participation and income assistance. The neighbourhoods that display relatively frequent use of these arrangements are also distributed across the entire country, and again show clear signs of clustering in the northeast of the Netherlands (see figure). As a result, there is an overlap between neighbourhoods that see lots of social issues and neighbourhoods with a higher frequency of unhealthy lifestyles. Overlap primarily occurs between the use of social benefits and smoking and overweight.

Neighbourhoods that are home to many people with lower incomes often show an accumulation of negative characteristics, such as air and noise pollution due to nearby roads and motorways, less well-insulated homes, a street plan which is less conductive to easy mobility, and a wider range of options for unhealthy food. Continuing urbanisation will cause people to be pushed to the fringes of the cities. Rising house prices, for instance, mean that only people with high incomes can still afford to have houses in the most coveted neighbourhoods, often in and around city centres. That will change the composition of these neighbourhoods, causing them to become less diversified. This trend reinforces the income-based division; there will be neighbourhoods which will be primarily occupied by people with higher incomes and neighbourhoods primarily housing people with lower incomes. This will also exacerbate the differences in health between neighbourhoods. 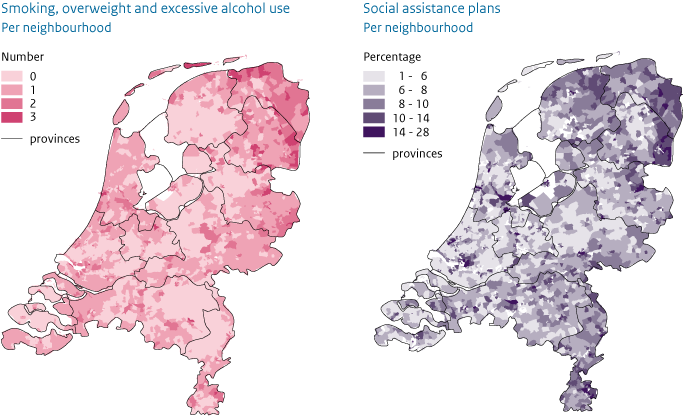