Lifestyle and the living environment both affect health
In terms of lifestyle, we can see both positive and negative future developments. Fewer people are smoking and more people are exercising. On the other hand, more people are overweight. Unhealthy behaviour is responsible for almost 20 percent of the burden of disease, with smoking being the most significant cause. An unhealthy indoor and outdoor environment causes 4 percent of the burden of disease, with air pollution as the most significant cause. Unhealthy working conditions cause nearly 5 percent of the burden of disease. These trends are not the same for all demographics. Smoking is declining more rapidly amongst people with a high socio-economic status, while obesity is increasing more rapidly amongst people who have a low socio-economic status.

Other significant lifestyle factors include alcohol use, diet and sleep. 9 percent of Dutch adults currently drink excessive amounts of alcohol. A very small percentage eat completely in line with the Dutch Guidelines for a Healthy Diet. However, the downwards trend in fruit and vegetable consumption has stabilised in recent years. How long we sleep has not changed in the past 25 years. No data is available on how the quality of our sleep has developed over time in recent years. However, 1 in 5 Dutch people indicate that they have difficulty sleeping. Besides problems in coping with daily life, this can also have negative effects on health. The future development of these lifestyle factors are uncertain.

Combination of smoking, drinking, and/or overweight in more than 1 in 10 Dutch adults

Almost 38 percent of the Dutch population does not smoke, does not drink excessively, and is not overweight. Slightly under half the population has just one of these risk factors. At nearly 37 percent, overweight is by far the most common lifestyle factor. Three-quarters of people who are overweight do not have either of the other two risk factors. Smoking and alcohol use are seen relatively more often in combination with the other lifestyle factors. In total, 12 percent of the population exhibit two of these three risk factors, while just over 1 percent smokes, drinks and weighs more than recommend (see figure).

Indicator(s) used: Percentage of population aged 19 and over being overweight (Body mass index >= 25), being an occasional smoker (including daily smoking), and/or excessively using alcohol (more than 21/ 14 glasses of alcohol per man/woman per week. Percentages might differ from those presented in the Trend Scenario due to the use of different sources.

Health is determined by many different factors

Our health is affected by smoking, overweight and alcohol use, but also by many other lifestyle factors, such as physical activity, diet and high blood pressure. It is possible to assess the impact of lifestyle factors on public health by looking at the loss of years of life due to premature death, and the loss of healthy years of life due to disease. Smoking is responsible for the greatest loss of years, at 1.5 years due to premature death and nearly another whole year due to disease. Unhealthy diets cause us to lose more than two years in total. In addition to lifestyle factors, the social and physical environment we live in are also relevant. Air pollution causes us to lose nearly 1 year, and the health impact of work also causes 1 year to be lost. Behaviour, lifestyle and the environment we live, work and learn in significantly affect our health. The factors that are not as closely related to the individual person, but do have an influence on health, are also referred to as the wider determinants of health (see also the Thematic Foresight Study on Wider determinants of health).

The living environment can have negative or positive effects on health

Air, water and soil quality is expected to improve in future. There will continue to be regional variation due to local circumstances such as traffic, livestock farming, wood stoves and industry. In future, continuing urbanisation may lead to localised increases or spikes in concentrations of air pollution. Intensive livestock farming not only increases emissions of ultrafine particles, but also poses other risks to public health, for instance by spreading pathogens and treatment-resistant bacteria. Despite policies implemented to minimise health impact, this continues to be a matter that requires attention, since the Netherlands has many places where livestock animals and people live in close proximity: over 350,000 private residences are within 250 metres of a livestock farm.

The structure of the living environment plays an important role in offsetting the effects of climate change. Health effects of climate change are related for example to heat stress and the spread of pathogens and allergens. An effective deployment of green spaces and water in the living environment is important in order to minimise these health effects. Green spaces and water in the living environment can also help promote physical activity, social interaction, relaxation and recreation. When incorporating green spaces and water into town and city planning, it is also important to take into account possible undesirable side effects, such as pests, the spread of infectious diseases, and the prevalence of allergens. Such measures as promoting the use of public transport and minimising vehicle traffic in inner-city areas can improve air quality.

As far as work is concerned, the continuing advance of the 24-hour economy is an important future trend. People will work evenings and nights more frequently as a result. Working long hours during late evenings and nights is clearly associated with an increase in difficulty sleeping and with health conditions such as diabetes and cardiovascular diseases.

In 2015, unhealthy behaviour such as smoking, alcohol consumption, insufficient physical activity and unhealthy diet were responsible for almost 20 percent of the burden of disease, over 35,000 deaths and 9 billion in health care expenditures. Smoking is the most significant cause of mortality and morbidity (20,000 deaths and over 9 percent of the burden of disease), followed by unhealthy diet, alcohol use and lack of physical activity. Other than behaviour, the ‘personal determinants’ are important. These determinants often are a result of an interaction between genes, behaviour and environmental factors. High blood pressure, high blood sugar and overweight are the most important determinants in this context. Overall, the personal determinants cause slightly less mortality and burden of disease than behaviour, but do involve higher health care expenditures (10 billion).

In addition to behaviour and personal factors, determinants in the social and physical environment are also relevant. An unhealthy indoor and outdoor environment causes 4 percent of the burden of disease. Air pollution is an important factor in the outdoor environment category, causing nearly 11,000 deaths. Outdoor environment factors also include the health effects of UV radiation and noise pollution. People who are frequently exposed to loud noise are more likely to die of cardiovascular diseases. Unhealthy working conditions, such as exposure to substances and physical and mental pressure, cause nearly 5 percent of burden of disease, as well as nearly 2 billion euros in health care expenditures.

Collectively, all these determinants account for approximately half of all deaths, one-third of the total burden of disease, and one-fifth of all health care expenditures. That means that the majority are caused by other factors that we do not know (or not yet), or for which we have not yet established sufficient evidence about the health effects, such as stress factors. These results show the impact of the determinants on the outcomes of burden of disease, mortality and health care expenditures. They do not include the impact on such outcomes as sleep disturbance, inconvenience and absenteeism. More information on the methods used to arrive at these calculations is provided here. 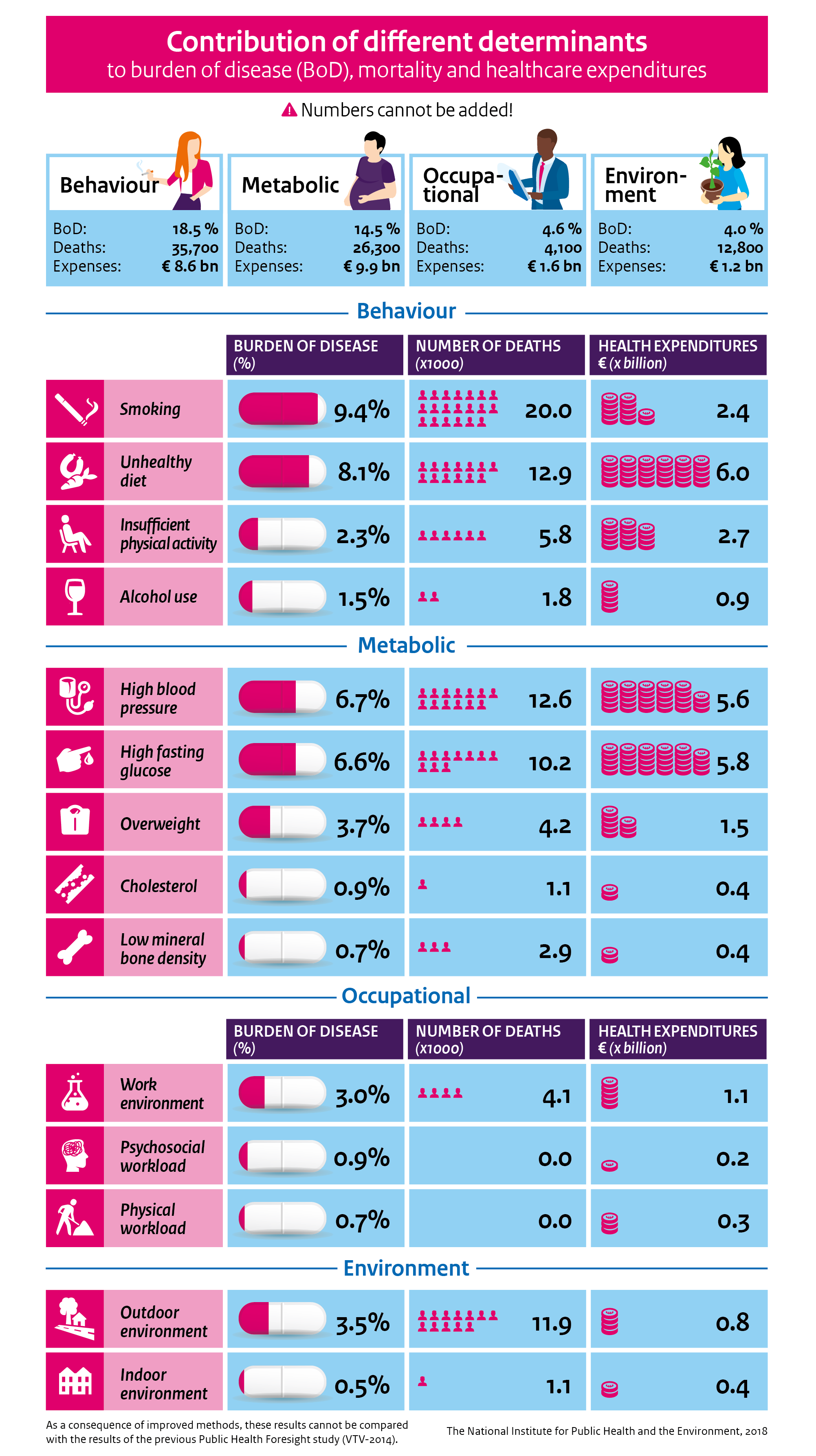