The ageing population has a major impact on public health and health care
The percentage of older people in society is increasing. People are also reaching very old age more and more often. As a result, more and more people will suffer from chronic diseases such as arthrosis, neck and back pain, diabetes and dementia. In addition, people are increasingly suffering from multiple diseases at the same time. In 2040, dementia will cause the highest mortality and the highest burden of disease. It is not just medical issues that are increasing, either; social issues are increasing as well. The number of lonely older people is on the rise. Older people live independently more often, and often live alone. These developments will lead to more pressure on formal as well as informal health care. Health care services will face the most pressure in regions where the population is shrinking.

Over the next 25 years, the effects of the ageing population will have an increasing impact. And more and more people are reaching very old age, resulting in a growing number of elderly people. In 2040, we will have 1.7 million more people over 65, and more than 200,000 more people over the age of 90. As a result, more people in the future will suffer from chronic diseases such as arthrosis, neck and back pain, and diabetes. In 2040, for instance, there will be over a million additional people with arthrosis compared to 2015. The number of people suffering from dementia will double from 154,000 in 2015 to 330,000 in 2040. Even though there are other diseases which occur much more frequently, dementia has a huge impact on public health. In 2040, dementia will be the disease that will cause the highest mortality and the highest burden of disease.

Multiple diseases and issues at the same time

There will not only be more people who have a chronic disease, but there will also be more people who have multiple diseases at the same time. We also refer to that as multimorbidity. In addition to chronic diseases, older people often also struggle with issues such as falling, memory problems, visual and hearing impairments, limitations in daily living, incontinence, loneliness and poly-pharmacy (the use of multiple medicines at the same time). The ageing population will also result in more older people being affected by these problems in the future. An accumulation of such problems puts older people in a more vulnerable position.

More loneliness and less control due to the ageing population

Increasing pressure on both formal and informal care

The ageing population will increase pressure on health care. In the future, many more people will have some type of disease that requires treatment. Health care demand will also become more complex due to increasing multimorbidity. Pressure will not only increase on formal care, but on informal care as well. That is the result of more and more seniors living independently. The number of single older people will also increase. At the same time, the ratio between people over 85 and people between 50 and 64 – the generation of children that can take care of the people over 85 – will shift from 1 to 10 now down to 1 to 4 in 2040. This means that there will be fewer children who can take care of their parents in future.

The needs of older people are not limited to medical care, but also extend to the field of well-being. More focus on well-being may help older people to retain a good quality of life, in spite of disease and limitations. This not only demands better collaboration between health care professionals, but also between health care professionals, professionals addressing various aspects of well-being, and informal caregivers. In certain areas of the Netherlands where the population is declining, health care and other services will be under pressure because fewer people live there. At the same time, these regions are also seeing the sharpest increase in the ageing population, accompanied by a growing demand for health care and other services. 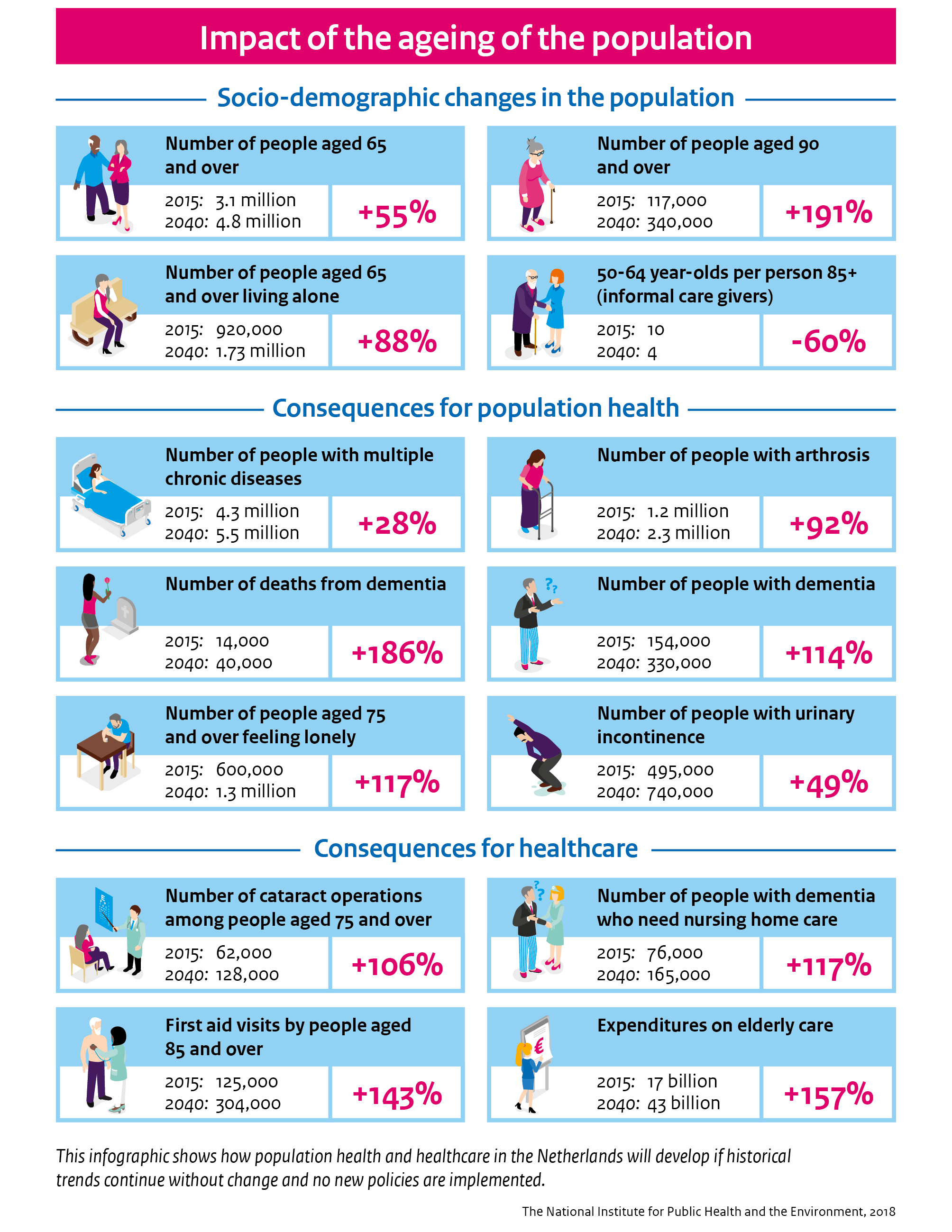 Impact of the ageing of the population