Vigilant to known and emergent risks
Antibiotic resistance will remain a threat to our public health; we need to continue to keep a close eye on this issue. Other key concerns are effective deployment of green spaces and water in the living environment to offset the effects of climate change, and declining immunisation coverage. There are also new developments which may entail emergent risks. Technologies such as virtual reality and 3D printing could still cause unknown health effects that would become apparent with more frequent use. In addition, more medication residues, micro-plastics and nano-particles will enter our environment. The health effects they might cause are still unclear at the moment.

Antibiotic resistance and climate change are known threats to our public health. On a global scale, these two developments are also considered significant risks for instability, with an average to high probability and impact (see figure). Antibiotic resistance and climate change currently have a relatively minor effect on public health in the Netherlands, but could potentially have a huge impact in the future if these developments are not properly offset now. One potential consequence of increasing antibiotic resistance is that it may no longer be possible to effectively treat infections in future. This could have huge consequences for our public health. Quite a few policy initiatives have already been launched to prevent this. These initiatives focus on reducing the spread of resistant bacteria and reducing antibiotic use, both in people and animals, while also focusing on the development of new antibiotics. Antibiotic resistance in the Netherlands is also influenced by what happens abroad. That is why it is important to be ever-vigilant on how the problem develops, adopting an approach that incorporates national and international levels. The ageing population will also result in more older people needing to be moved between various health care institutions in future, which will increase the risk of spreading resistant bacteria. The fact that people are travelling more and more also contributes to the continued spread.

The imminent effects of climate change have been under close scrutiny for some time now. The effective deployment of green spaces and water in the living environment to offset these effects continues to be particularly important here, specifically because green spaces and water in urban areas will come under pressure due to continuing urbanisation. Climate change may also cause an increase in the spread of pathogens and allergens. It also leads to an increase in heat stress, which is a particular problem for older people and other vulnerable groups, such as young children, people suffering from respiratory diseases and people with cardiovascular diseases. Due to the ageing population, heat stress will only increase in importance as a public health issue in the future.

A third established problem that deserves constant attention is the declining immunisation rate. The Netherlands is currently below the 95% immunisation standard set by the World Health Organisation (WHO) for the first and second vaccination for measles, mumps and rubella (MMR) . Declining immunisation coverage will increase the risk of future outbreaks. Measles represents the biggest risk, since it is a highly infectious disease with potentially serious consequences. A similar decline is observed in other vaccinations in the National Immunisation Programme. 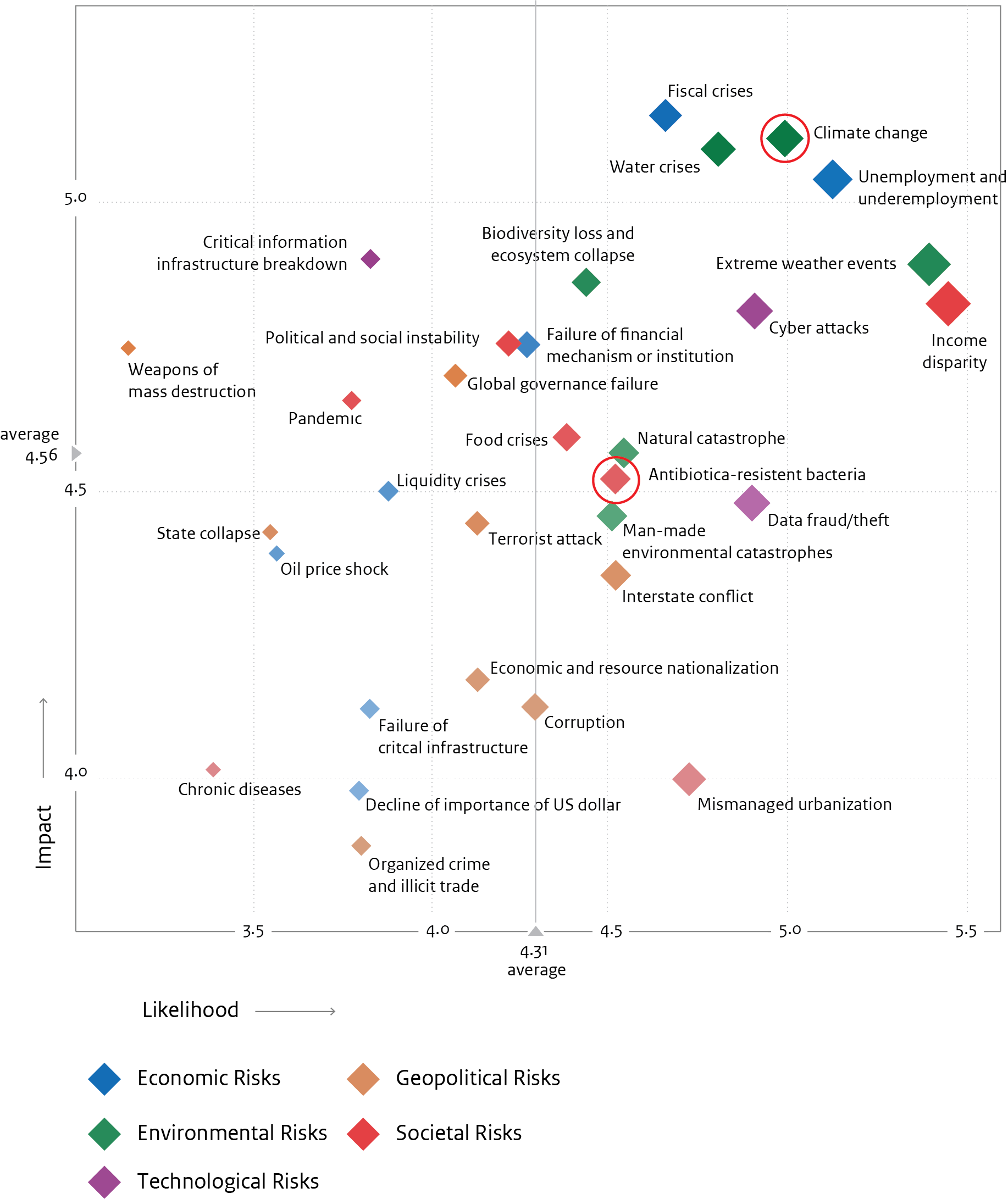 New technology may have negative effects on population health

In addition to known threats, we are also facing various new developments which might have an impact on public health. A number of these involve technology. For example, it is not unimaginable that an extended stay in virtual reality could cause psychological and physical problems. We do not have a solid grasp on these risks yet. If more 3D-printed products are used in future, it may pose dangers to public health. The decentralised production means that the government is less able to properly protect citizens from unsafe situations and inferior products. As a result, centralised quality control is much more difficult – and that applies to the production process as well as the final result. Toxic chemicals could be released while melting the raw materials and printing the objects, and the final product could be defective, making it unsafe.

It is a well-known fact that frequent use of headphones at high volume may cause hearing damage. In addition, it has been proven that prolonged use of video screens can cause physical problems, such as near-sightedness, as well as a disrupted biorhythm and sleeping disorders due to overexposure to ‘blue light’. Extensive digitisation makes it likely that we will start using video screens more often in the future. This could therefore have a negative impact on public health. However, at this time it is still unclear how significant that impact will be.

More medication residues, micro-plastics and nano-particles in our environment

The ageing population will result in increased use of medication. This will lead to more medication residues in the surface water, since these traces are only partially removed with wastewater purification. We do not know enough about what consequences that will have for public health. Increasing use of plastics will cause more and more micro-plastics to end up in surface water and other parts of the living environment, including the food chain. This could entail new health risks that are not yet known, especially because plastics hardly degrade and contain many additives.
Nanotechnology applications are expected to see continued growth in future. Nanoparticles may be released into the environment in the process. It is still unclear what consequences that will have, although knowledge is available about the harmful effects of some nano-materials. Low-soluble nanoparticles can for instance lead to local inflammation in the lungs when inhaled. Some particles can end up in the bloodstream and accumulate in internal organs, such as the liver and spleen. It is also known that certain types of nanofibres can cause asbestos-like reactions. However, there is little insight into actual human exposure to nanoparticles, which currently makes it impossible to determine their impact on public health.

This web article is part of the Synthesis: the integration of the Trend Scenario, the Thematic Foresight Studies and the Options for Action